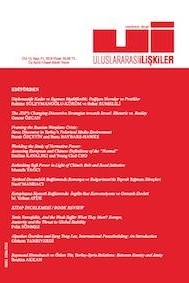 According to the master commemorative narrative of the EU, the European integration project represents a break with the violent European past characterised by fragmentation and nationalism, which culminated in World War Two and the crimes of Nazism and Stalinism. However, recent scholarship has criticised the omission of 19th and 20th-century European colonialism from the memory narratives advanced by the EU. In this article, I use the permanent exhibition in the House of European History (HEH) in Brussels to take this insight one step further and make two arguments. Firstly, I show that it is not only colonialism that is erased from official memory but, more broadly, empires and imperialism, although most European history over the past 2000 years was imperial. Secondly, I understand this “imperial amnesia” as an anxiety-controlling mechanism aimed at reducing the dissonance between the self-proclaimed image of a normative and civilian power on the one hand and imperial-like tendencies in its behaviour on the other.

Selling Peace: How to Frame a Serbia/Kosovo Deal in a Referendum

The Politics of Giving Voice: Media Framing of Extremist Groups in the 2010 Pride Parade in Serbia

Towards the existentialist turn in IR: introduction to the symposium on anxiety (co-authored with Jelena Subotić)